The UROP Experience at FSU History: The Making of a Book 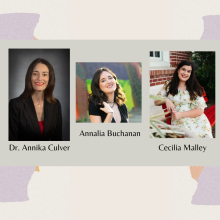 Cecilia Malley and Annalia Buchanan, FSU first-year students, are helping Dr. Annika Culver with the research for her book on Ms. Masako Hachisuka, the grand-niece of the last shogun of Japan, whose parents were Mrs. Chiye Nagamine and Marquis Hachisuka Masauji. Both are working on the project through FSU’s Undergraduate Research Opportunity Program which enables freshman, sophomore, and transfer students to get hands-on research experience by working with faculty, graduate students, and post-doctoral scholars. For Dr. Culver, this is the second UROP project that she is mentoring.

Cecilia is a Vocal Performance major from Tallahassee, while Annalia is a History major from Little Rock, Arkansas. Both have a passion for research and history. Cecilia grew up surrounded by history books, “I read them like novels. I listened to audiobooks on car rides.” As a musically-inclined child, Cecilia liked finding out the historical setting for the pieces she was performing. Annalia was fascinated by history. “I am a very pattern and logic-oriented person, and I wanted to know why people did things, like go to war. I was also museum obsessed as a child. History is my passion, my creative outlet,” said Annalia.

Dr. Culver, a professor of East Asian history, is writing a microhistory of one Japanese-American family. She is investigating how the family, connected to both the shogunal and imperial dynasties of Japan, negotiated the global events of the 1930s and 40s, the social changes of the post-World War II era, as well as their continuing connections to other aristocratic and wealthy families around the world. Drawing on interviews and the personal archive of Ms. Hachisuka, Dr. Culver is recreating the world of one Japanese-American family. Annalia’s and Cecilia’s research is helping to round out that picture.

Both Annalia and Cecilia were intrigued by the topic which was far removed from what they had done in high school history. “I was always reading history books,” said Cecilia, “so, I was curious to find out how to write one.” “I wanted to get involved with the History department beyond taking classes,” stated Annalia. “I see UROP as my first history internship, and I will bounce to a ton more when I am done.”

Cecilia’s task was to research the different cultural and historical contexts in which Ms. Hachisuka and her family lived. As Ms. Hachisuka was educated in Catholic school as a child, Cecilia investigated the topic of Catholic education in Japan. Ms. Hachisuka provided nursing support in New Orleans during the AIDS epidemic in the 1980s, Cecilia worked on finding secondary sources on the stigma associated with HIV, focusing specifically on the context of New Orleans. “I learned to do research in the most efficient way possible – beyond Google,” said Cecilia.

Annalia’s job was to verify the timeline of the family’s movements. She used Ancestry.com for most of that. Annalia tracked down marriage and death certificates, occupational licenses, title deeds to properties, and mention of the family in the news media. She located family members on ship and plane manifests, as well as their internment records during World War II. Annalia ended up making a timeline of the family’s movements based on all the documents she found. “I made a list of everything I found, but the timeline presents it all in the right chronological order.”

Annalia and Cecilia met twice a month with Dr. Culver. All three pooled the information they were finding and sketched out the next goals to pursue. Cecilia and Annalia also peer-reviewed each other’s work. Both had contracted to spend eight-hours per week on the UROP project.

Both Annalia and Cecilia also met twice a month with their UROP cohort. There, they learned about research tools and strategies important for the Humanities. “We learned how to evaluate data bases, how you use specific websites,” said Annalia. “We also had a practice session presenting our material to prepare for our presenting at the Undergraduate Research Symposium. That was super helpful.”

For Cecilia, one of the best moments was when Dr. Culver finalized the chapter titles, and the structure of the book became visible. “It was surprising to see all that goes into researching, organizing, and writing a book.” For Annalia, her favorite part was finding out things about the people she was working on. “It was like watching historical reality tv.”

Both Cecilia and Annalia liked that the project gave them flexibility about when to do their work. “As a Music major with classes, practice, rehearsals, I was lucky to find a project that allowed me to organize my work time as I needed it,” said Cecilia.

Self-motivation was the most challenging thing in Annalia’s eyes. “Avoiding procrastination was hard. But the project helped me stay on track with my other assignments. I would do them first, so that I had time to do the research I really wanted to do. Every Thursday I had a math quiz. I would do that, then de-compress, and go out for coffee to do my UROP work.”

The advice Annalia would give to students interested in UROP is that the work is self-directed. “You are working with a professor, but they are not your minder. It is up to you to get your assignments done. You are responsible for your part of the project.”