Interning at 'Age of Revolutions' 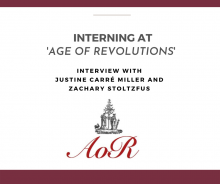 Age of Revolutions (AoR) is an online platform that has been making an impact on the field of revolutionary history. The site is innovative in the realm of academic publishing because it is open-access yet maintains a rigorous peer-review process. In an earlier article (The Making of 'Age of Revolution'), we describe how Bryan Banks and Cindy Ermus, both alumni of FSU History and the Institute on Napoleon and the French Revolution (INFR), created the online platform. When they needed help with the website, their connection to the INFR encouraged them to offer fellow Institute members Justine Carré Miller and Zachary Stoltzfus an opportunity to gain valuable experience. They jumped at the chance. Each has their respective tasks and projects, and both have seized this possibility to hone their digital skills and make a difference in their field.

Justine was new to AoR. She was excited to take on the job not only to make new connections in the field, learn new skills, but also to strengthen her CV. AoR has a strong online presence and in Banks’ words, it is a “social media created website”. Because of this, Justine is not only able to network within the staff of AoR, but also through Twitter, the platform that really gave AoR the push it needed to gain recognition. Justine says that through her involvement with AoR and encouragement from Banks and Ermus, her Twitter following has grown immensely. In Zachary’s case, he already had connections to Banks and Ermus. He had submitted articles for publication to AoR, so he says that he “had a bit of a working relationship from that experience.” He was also eager to put his WordPress skills to work for AoR. His familiarity with editing and updating WordPress sites allowed him to jump into the project without a steep learning curve.

Each of them is working on a different way to upgrade the website. When Banks and Ermus created the positions, they recognized that the website experience could be improved. Specifically, they wanted to make the website more accessible, streamline posting of articles, and create robust bibliographies on diverse subjects that will help students and established scholars alike.

Zachary’s role is to work on the bibliographies. The existing bibliographies had not been updated since 2015-2016 when AoR was created. In Zachary’s words, his job is to perform a “more thorough pass” through the scholarship to build more extensive bibliographies. He spent much of fall 2020, pouring over different H-Net sites to find relevant books and articles. He was given the task of sifting through all of the reviews published in the AHR (The American Historical Review) since 2014. Explaining his method, Zachary said that he “looked at all of [the H-Net sites] and then selected any work that was pertinent to the bibliographies in their respective fields.” Some of the areas that he researched and gathered citations for include French History, Colonial American History, and Haitian History. In total, he says, he generated a list of scholarly citations, around thirty pages in length, to add to the existing bibliographies. This semester he is working on uploading them to the actual website. The bibliographies serve as invaluable resources for doctoral students working on their comprehensive exams, as well as scholars looking for a place to start researching.

Justine’s tasks center on improving the website’s accessibility. She went back through every single blog post since the project began in 2015 and added alt-text to all of the pictures. Though Banks and Ermus have worked to make the website user-friendly for those who use the “listen” option, when the text-reader encountered a picture, it did not convert into meaningful text—rather, it would read out the picture’s URL. Justine says that “alt text is a short, written description of an image which is read aloud for viewers who are visually impaired.” She had to learn how to write alt-text effectively and efficiently. She describes a balance between needing to keep it simple, but still explain what is happening in a picture or painting. The process took her a long time because there was such a huge catalog of articles with accompanying pictures. Once she completed that assignment, she moved on to helping draft posts for articles that were in the pipeline to be published. When she receives a new article, Justine formats it for WordPress and creates the individual blog post. She says she enjoys the job because it allows her to read new and interesting scholarship that she may have overlooked otherwise.

Although students at different points in their academic career, Justine and Zachary both have had to work hard to balance their tasks for AoR with their graduate work and research. Zachary is currently working on his dissertation but manages to dedicate at least one day a week to AoR. Combing through journals and reviews in the fall semester was more time consuming. Now, his time is spent uploading this work. Justine agrees that the fall semester was more challenging: “It was my first semester grading, so that was a little difficult for me. It was such a big task that it seemed really hard to tackle at first.” She learned to proceed one step at a time, and during winter break she was able to dedicate more time to it and power through. This semester, Justine sticks to a more rigid schedule, as AoR publishes every Monday. She works her job into her schedule around courses and grading by setting aside at least one evening a week to work on editing and formatting.

The experience has not only allowed Justine and Zachary to experience working for a journal and to network, but also to gain some new skills. Justine says that the biggest take-away from her work is that she has gained new digital expertise. She has become more comfortable using WordPress and learned how to navigate difficult processes like assessing copyright for images used on the website. She also takes pride in seeing the articles she works on being posted to social media: “It is really rewarding when I see [AoR] share the articles on social media. I’m like ‘oh, I made that. I didn’t write it, but I helped it come to fruition.’”

Zachary looks back on his experience with AoR as a time for intellectual growth: “the thing that has been the most interesting about it is it has given me the chance to find things that are relevant to my own research.” Although the process of uploading the bibliographies can be repetitive, compiling the bibliographies facilitated the discovery of scholarship that excites Zachary. “Sometimes you find a work that feels like a gem,” he notes. The assignment has also helped him stay current with the most recent literature, enabling him to feel more plugged in to his field. Ultimately, he hopes that the bibliographies he constructed help fellow historians, whether they are graduate students or established scholars trying to find relevant material.

Since its inception several years ago, AoR has steadily gained steam. With growing affiliations with conferences and other digital humanities projects, the reach of their work expanded. Zachary finds this really exciting and says that one of the best things about AoR is that it is “carving out a position for itself as a site that people go to when they want to hear about a book that’s just been released or to hear an author’s summary of their own book.” He hopes that the site will serve as an inspiration to pursue scholarly blogs and other digital history projects. Justine and Zachary’s work with AoR has contributed to their fields in notable ways, and it is all the more remarkable that they are able to work with INFR alumni who have built the platform from the ground up! “It’s cool to see that two graduates of FSU were able to get this off the ground.” By making the website more accessible and by providing detailed reading lists, Justine and Zachary have helped make the website more user-friendly. Both are excited to see what is next for AoR.