Honors in the Major Project: “Melodies of Mirages: Exoticism, Folklore, and 'Performing' Santeria”, Elias Larralde and Dr. Robinson A. Herrera 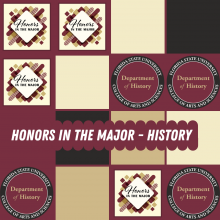 Honors in the Major: From Idea to Thesis

The idea behind Elias Larralde’s Honors in the Major thesis was already germinating in his mind before he started at FSU. The topic, the mapping of an Afro-Cuban religious song using geographic information systems, would eventually serve as the basis for his research topic. However, it was not until Fall 2018, when Larralde took his first course with Dr. Robinson A. Herrera, that he was encouraged to turn his ideas into an Honors project.

Honors in the Major (HITM) provides Florida State students with the opportunity to complete a research thesis or creative project under the direction of a faculty committee chosen by the student. The process, which typically spans two to three semesters, involves selecting a topic, creating a prospectus, producing a thesis based on conducted research, and successfully defending it orally before the student’s committee.

As Elias explained, his first step in this process involved working with Dr. Herrera, who serves as his thesis director, to “chip away at refining what the questions were.” The result was a research topic similar to his original idea but much more conducive to an HITM project. “My research is about how Afro-Cuban religious music was taken and appropriated by both American entertainment in the 1950s and then revolutionary government programs in the 1960s.”

During the 1950s, Afro-Cuban religions, known under the general term “Santeria”, were featured in music and movies in the United States, as well as studied by scholars in Cuba. Following the Cuban Revolution in 1959, these practices were labeled as national folklore, rather than an established religion. Therefore, Larralde is specifically researching how this recategorization affected perceptions of Afro-Cuban religions, as well as the pushback they received from Afro-Cuban performers and their music.

These questions have led Elias to research the work of Lydia Cabrera, one of the best-known scholars of Afro-Cuban religion. As he explained, much what he discovered in her collection was “ethnographic notes she made from interviews of people who practiced their religion back in the 50s and 60s.” Larralde has also researched one of the most prominent Afro-Cuban singers, Celia Cruz. After finding out about an oral history the Smithsonian Museum of American History had conducted about Cruz before her death, Elias contacted the Smithsonian, and learned that the history was still in their archives and contained over five hours of material. For Elias, moments like these gave him “a sense of clarity and confidence in the project.”

Dr. Herrera described his role as thesis director as “to be as hands on or as hands off as the person would like.” Herrera emphasized the fact that it is up to the student to choose a topic that they are genuinely interested in. “I don’t believe in posing topics or coercing people to do this research topic or other… It is really easy to say it’s not going to work if you do this, but then it would have been a thesis that I would have written, not the thesis that the person who is interested in the topic ends up writing.” However, in the HITM program, students are given the freedom and space to be as creative as they would like with their thesis, as well as the ability to work directly with some of the university’s most distinguished faculty.

Elias did some of his research at the University of Miami’s Cuban Heritage Collection and the Library of Congress’ American Folklife Center. He could do so because of an IDEA grant he was awarded in the Summer of 2019. IDEA grants, which are funded by the FSU Center for Undergraduate Research and Academic Engagement, provide students in pursuit of a research project with awards to conduct research. As Elias explained, “The IDEA Grant can really set the tone for your research. You have the opportunity to go to facilities or centers that you may not be able to go to without this award.” Though the opportunity to conduct research at these archives can be daunting at first, especially for an undergraduate, Larralde was able to begin the writing of his thesis armed with a wealth of information.

Since the HITM process is spaced out across two or three semesters, the day to day work can vary depending on the stage one is in. During the Prospectus Semester, students do research guided by the big questions that frame their work. They will assemble the material into a prospectus that their HITM committee will read.

The next step is writing the thesis, which Elias completed during this past Summer semester. As he explained, this stage is “really just a process of doing something every day, even if it was just a couple of sentences.”

The final stage is the Defense Semester, which Elias is in the process of completing. Elias is revising and polishing his thesis with input from Dr. Herrera. In November, he will discuss his research with his thesis director and committee. This is the known as the defense. When asked how COVID has changed his research process, Larralde responded, “I was extremely lucky that it [COVID] hit in the time where I had all of my materials already. Overall, the biggest change for me is that the defense will be [held] virtually.”

Without a doubt, an Honors thesis is no simple task, especially given the fact that in recent years an HITM thesis in the History Department has averaged around 56 pages. As Herrera explains, “It is a really scary thing to think your professors, that are experts in different areas, are going to read your work.” However, Herrera also adds that completing the thesis is about tenacity, confidence, and growth. For Elias, this experience has definitely had its highs and lows. However, as he adds, “I think the work, the research, and the gradual piecing of your argument together… balance out any stressful days.”

For Elias, the HITM project has helped to prepare him for what he could experience in graduate school, adding “you get an overall experience of how you would approach the logistics of the project.” He plans to attend graduate school in the hopes of becoming a professor of ethnomusicology in the future. Besides the experience of conducting research, Larralde has also gained a mentor in Dr. Herrera. When asked about this mentorship, Larralde expressed how crucial it is, stating “working with Dr. Herrera shows me what kind of things happen when working with your director and how to manage things.” Dr. Herrera explained “I think it is a really exciting process to see an original research idea grow and develop over time.”

When asked what advice he has for prospective HITM students, Elias made it very clear… “If you have even an inkling of an idea, just start exploring it in any kind of direction.” As Dr. Herrera added, “This is original research and there are no limits on creativity.” Over the past few years, this creativity has resulted in Herrera advising students about their theses on a variety of topics, such as propaganda of left-wing groups in Latin America to soccer leagues in Quincy, Florida. However, Herrera did add, “Don’t do this because you think it will make you competitive or strengthen your resume. Do this because you are genuinely interested in the topic.”

Besides giving advice for prospective HITM students, Dr. Herrera had a special message for students from traditionally marginalized communities, specifically BIPOC and female students, stating, “I would say… that their work is important and that their work has tremendous value.” He also emphasized how FSU’s research opportunities are “open to everyone and no one should feel as though they are left out from being able to undertake a thesis project.”