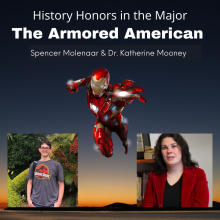 Who would not want to work on superheroes? To look at their lives and exploits in a world of fast-paced adventures and moral absolutes. This is what Spencer Molenaar has decided to work on in his Honors in the Major project (HITM) for History. He is taking the films Ironman and Ironman 2 as “texts of the moment,” and is investigating both how the films reflected on but also were received by American society in the first decade of the 2000s.

Initially, Spencer was interested in writing about the villains of history, what influenced their morals and actions, and had asked Dr. Mooney to be his faculty mentor for a HITM thesis involving John C. Calhoun and Roger B. Taney. But once he started writing a paper on Iron man for her Popular Culture class, he was smitten by the idea of the reformed superhero, Tony Stark. In this first paper, Spencer focused on the comparison between Iron Man of the 1970s comics and Iron Man of the 2000s films, the Iron Man of the Cold and Vietnam War era versus the Iron Man post 9/11. In his HITM project, he has set himself a more ambitious remit: Iron Man as a political commentary on the beginning of the 21st century.

Spencer has set his project up in two parts. The first is an analysis of the first two Iron Man movies. Spencer views Iron Man, aka Tony Stark, as a proxy for George W. Bush. Stark presides over a military industrial complex of making, buying, and selling weapons to the U.S military. This inadvertently contributes to the reign of bands of terrorists in the Middle East. Iron Man then depicts an “idealistic narrative that some redeeming hero,” will come in to save the day. It is Spencer’s contention that the film reflects on the Bush in administration and the ongoing conflict in the Middle East.

In his second part, Spencer reviews reactions of critics and the public to the films. While he can draw on a wealth of critics’ commentaries and reviews, getting at the opinions of the viewing public has been harder. In addition to using sites like ‘Rotten Tomatoes,’ Spencer has been reviewing opinion polls, fan blogs, fan fiction, and other net-based material. Covid has prevented him from working in brick & mortar archives, much to his disappointment, but due to the recent nature of the topic, most of his sources are available online.

The sources that Spencer is analyzing have made his research project a bit more time-consuming than he had foreseen. In the first instance, Spencer is wrestling with accessing online sources from the early 2000s. Additionally, he needs to evaluate these sources without the benefit of a large stack of history books that could provide him with context. Time management is one of the big issues that Spencer is flagging up. “I have time set aside every Tuesday to work on the project; and I talk to Dr. Mooney then too.” But on top of that, Spencer said: “I do something with the project, whenever I have free time.”

Choosing an advisor, is what both Spencer and Dr. Mooney emphasize to be one of the most important aspects of the process. Spencer had started working with Dr. Mooney on his first villain-oriented project before he switched to Iron Man. In consultation with her, he put his HITM committee together. “You should look for someone who you want to work with, who is going to be both supportive and helpful to you.” Dr. Mooney has supervised at least one HITM thesis a year since joining FSU’s faculty. She finds this process of advising HITM students to be one of the most fun and rewarding aspects of her job. It allows her to see students grow and “figure out what they are capable of on their own outside of the classroom.”

When asked what advice he may have for someone thinking about doing Honors in the Major, Spencer suggested: “take some time to sit back and ask yourself, what do you want to get out of it, and why do you want to do it?” Spencer himself has applied to join an MA program next year. He sees the HITM program as a chance to hone his skills for graduate school. It has taught him a lot about research and working with a range of different materials. It has made him more skilled at sifting sources, analyzing his data, and establishing a plan for his writing project. Spencer is looking to write a thesis of around 50 pages, and that requires organizational skills as well as being good at writing clearly and persuasively. “If you choose to pursue the Honors in the Major project,” Dr. Mooney adds in, “it will become a major part of your graduate school application.”

But even if you have an eye on grad school that should not be the only reason for doing a HITM project. As Spencer discovered, the deeper he dug into Iron Man, the more he engaged with the films and the superhero, the more fun the project became. New research questions kept coming up. The more he immersed himself, the clearer it became that Iron Man could not just be an HITM thesis, or his MA work, but might also offer enough material for a future PhD dissertation. Spencer has yet to decide if this project will change his outlook on Iron Man, however. Not because of the amount of work, but because of his morbid curiosity about the psychological complexes of villains.