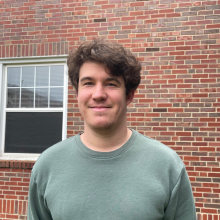 What’s the difference between undergrad and grad? What’s the difference between doing an MA and a PhD? And - should you do both graduate degrees or go straight into a PhD program? We reached out to FSU History alumnus Lee Morrison, MA 2021, to hear about his experiences. Lee, who was initially interested in antiquity, double majored in both History and Classical Civilizations from FSU from 2015 until he graduated in 2019. For his MA, he decided to concentrate on the Middle Ages under the guidance of Dr. James Palmer. His thesis focused on the religious lives of commercially-active laypeople in thirteenth-century Genoa, focusing on confraternities, devotion to saints, and charity (mostly to hospitals). Lee is now pursuing a PhD at Washington University in St. Louis.

For Lee, the major benefit of continuing with graduate studies was getting to expand on the research he did for his MA. While he was looking at hospitals in Genoa, he came across a wealth of primary sources that “didn’t readily apply to my MA thesis.” Many of these sources centered on monasteries, and the neighborhoods that grew up around them. Being able to go into greater depth on specific neighborhoods like Borgo di Santo Stefano, and their origins, is allowing Lee to ask questions such as “Who were these people? Were they immigrants; were they coming from the countryside; did they have a trade?”

Pursing a PhD after a terminal MA has allowed Lee to delve more deeply into research and has led him to incorporating new tools such as GIS (Geographic Information System) mapping, which “helps to make visual arguments.” The investigation of these questions helps to show how the neighborhoods that formed around monasteries were dynamic communities. “All histories of monastic rents and renting is looking at them as a static thing,” Lee explains, but he wants to demonstrate that “they’re a growing social community” with wider economic growth than previously believed.

At WUSTL, Lee is working under Dr. Daniel Bornstein, who was Dr. Palmer’s PhD advisor. This made his decision to go to WUSTL an easier one, but Lee is also thankful to have gone from his undergrad to a terminal MA at FSU “to have a more rounded experience.” Furthermore, Lee councils that when looking for a graduate program, you should remember to put your needs first. WUSTL “was a mix of personal fit and practical necessities for grad school,” Lee explains. One big attraction was smaller cohort sizes than other programs, which allows students to have more one-on-one time with their advisors. It’s in these conversations that “you can hash out questions about grad school and connect with advisors about their own experiences,” and this is also the time when you can find out if what you want to study is feasible or not.

The financial aspects of WUSTL were also very attractive for Lee. For many PhD programs, the funding packages vary in both amount and length of time. WUSTL offered Lee a six-year funding package, with summer funding automatically included. Pursuing a degree in higher education can not only be mentally straining, but financially as well, and it is always important to find a program that fits your financial needs as much as possible.

History has always been a deep passion for Lee, which was fostered by his father’s occupation as an AP U.S History teacher. “I had a wonderful opportunity to engage with the past through my dad,” Lee explains, “and this helped me to cultivate an interest in history.” Lee holds an interest in the deeper past than his father, however, and is fascinated by the fact that “you can find things that still resonate with people today,” even while looking back to the Middle Ages and Antiquity. Graduate school was, thus, always a major goal for Lee, especially with his dream to become a university professor.

Lee’s two biggest pieces of advice for those considering graduate school or continuing to a PhD program are to try going to as many events, such as lectures and faculty talks, that you can, as well as doing a terminal MA if you have the time and opportunity to, instead of jumping right into a PhD.

As an undergraduate moving into graduate school, there is a big learning curve that you must try to anticipate. Most courses follow a heavier reading load with a book/week/class policy, and there is more focus on the quality of papers as well as the length. Lee was able to take a graduate class as an undergraduate to get the feel for how a grad class operates, but he wishes he would have also gone to more lectures, paper talks, and events. As an undergraduate, he explains that he felt like he wasn’t qualified to ask questions and speak up at those events, but it would have been “helpful to go to learn how to ask questions and see people talk about their work.” Furthermore, he wishes that he wasn’t as reticent about asking questions while at such events. “The ability to dialogue with people in the field is an important skill to build up,” Lee explains, “I regret those times I wanted to raise my hand, but I didn’t…and if you’re interested in things, go to them, don’t feel like you’re barred.”

Lee attributes many of the successes he had as a PhD applicant to the training and support he received from FSU, as well as the extra time to truly consider why he wanted to do a PhD. Lee states that this is helpful especially if "you feel like you aren’t confident in yourself as an applicant, the extra two years of a terminal MA makes you an even better PhD applicant and helps you not have to figure out things as you go.”