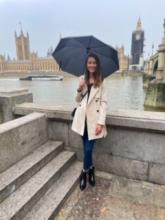 Megan Groninger is a PhD candidate working on 19th-century British history with Dr. Chuck Upchurch. She is investigating ways in which British women in the early to mid-19th century used motherhood as a site from which to argue for social and political change and how this changes how we view the early women’s movement. Megan was the graduate student representative on the executive council of the North American Conference of British Studies (NACBS) for the year 2021. The NACBS is the premier academic organization for British studies in the U.S. and Canada. It organizes conferences, offers fellowships, and awards article and book prizes.

How did you get involved in the NACBS?

I became a member of one of their regional conferences, the Southern Conference on British Studies (SCBS) during my MA and have attended their annual conferences regularly. At the end of 2020, the NACBS decided to have a graduate student representative on their council. I was nominated for the position because I had been a long-standing member of the regional conference that was hosting that year’s annual meeting, had presented papers multiple times, and had won the graduate student prize.

What was the role of the graduate student representative?

The NACBS was concerned to get a graduate student’s perspective on its activities. I attended several council meetings and voted on issues and positions. As the first grad student rep, I did not inherit a clearly defined role.

The position did allow me to help set up the NACBS Graduate and Early Career Caucus (GECC - we usually call it the ‘NACBS Grad Caucus’) in 2021 under the auspices of the NACBS. Together with a PhD student from Rutgers University, we decided to provide an online forum for people like us, students of British history who were affected by the Covid lockdown in Britain.

How did you go about organizing the NACBS Grad Caucus?

The Rutgers grad student, Alison, had borrowed the idea from another academic organization. We thought that this would be a great way of bringing graduate students together, especially during the pandemic when none of us could go to Britain for research, and we were all trapped at home. We wanted to establish a mechanism of connection and support for graduate students.

We organized a number of virtual workshops on themes like publishing your first article, teaching your first course, how to write a cover letter and CV, how to write a winning grant proposal, on historians in the media, how to do book reviews. One workshop was on jobs outside of academia, and there was also one on digital sources – given how much we were depending on them in the pandemic. We were fortunate that we got big name scholars to participate in the panels. During the last year and a half, we met about four times a semester.

While it was focused on graduate students doing British studies, we had participants from other disciplines and areas of history too.

Organizing the series of workshops turned out to be a lot of work. Mainly behind the scenes work to coordinate the speakers, advertise the meetings, ensure that we had enough people attending. The opportunity to set up the Grad Caucus came at the right time for me. And it was a lifeline to others in similar situations. By the end of my time as graduate student rep on the NACBS, I was ready to pass on the baton this semester though. I have a dissertation to work on, and with Britain opening up again to research, I was finally able to go to London for research last fall.

How did being involved help you?

I got to see the bigger picture with regards to the historical profession, and British historians specifically. It confronted me with questions like how can we market ourselves successfully both in academia and in the private sector? How to compete with other, especially U.S. historians?

I also got to connect with other graduate students who were going through the same thing. We were all stuck in limbo between coursework and dissertation writing. The sense of not being alone in that helped enormously during the pandemic.

And lastly, it was good to make connections with more senior academics. Now, I not only know British historians around the country, but I could also potentially ask them for a letter of recommendation at some future point. The networking will help me in the long run.

What advice do you have for other graduate students?

Get connected with your historical association or area studies association. Start at the regional level, if that exists. Meet graduate students from other institutions to share ideas and experiences. They will be your academic cohort nationally and internationally. See if you can set up supporting infrastructure, something as simple as a google doc with which you can share the tips and tricks of doing research in the archives of your country of study or possibly coordinate research trips.

I am lucky in that I have a cohort of students here at FSU who are also working on British history. Not all graduate students are that fortunate.