What’s it like to intern at a state park? William Oaks, PhD student 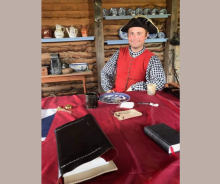 I have been working for Tennessee State Parks as a seasonal interpretive ranger for the past three summers. My friend Josh introduced me to the job during my gap year between undergraduate and graduate school. I applied because I loved the idea of working a summer with my best friend. As I got into the flow of the things, though, I discovered that I really enjoy crafting and delivering historical programs. It’s the perfect mix of educating and entertaining.

As a seasonal at Fort Loudoun State Historic Park, my job focused on their living history programs. Since Fort Loudon was built by the British in 1756 at the height of the French and Indian War, that meant wearing a lot of wool and learning old trades. In addition to marching and musketry, I also learned how to blacksmith and bake bread in a brick oven. I love these types of programs for two reasons. Not only does the audience get a show and tangible product, but the programmer can talk about anything while doing it: society, culture, religion, migration, and labor history. For me, though, those skills are fascinating enough on their own. We see a blacksmith in a movie make a sword in a few moments so that it builds drama. The first time I tried making a single nail, it took me over 12 minutes. Connecting that popular scene with the realities of the work gave me a healthy respect for those who did it, not to mention a great fun fact to introduce myself with at the next dinner party!

The toughest part is always picking up the nuances of whatever park you are working at. We typically move to a new park every two summers, and we do have a lot of choice in the matter of where we go. That said, transferring from a New Deal-era, rural mountain park one year to the colonial era the next means that you will need some time to research and learn a new story. I had the historical context down, but details are always a little tougher to master. I enjoy thinking about the most engaging way to convey the historical and personal narrative to our visitors – many of whom are wholly unfamiliar with history.

Likewise, learning new skills that are relevant to each park requires practice and good mentorship. It took a three-day workshop for me to get just enough knowledge to be comfortable experimenting with blacksmithing on my own, and I needed plenty of time to get used to the rhythm of pulling a crosscut saw with a coworker. Even though it was tough, what other job offers you the opportunity to practice historical skills in front of an audience? The greatest payoff, however, comes when a guest walks away from the program looking to learn more about what you had just told them. Asking for book recommendations, commenting on the content, and posing a lot of questions: those are the moments I live for.

Living history does not just immerse the guest but also the person doing it! You are literally putting yourself in their ‘straight last shoes;’ a 450-mile march across the mountains appears a lot different when you are wearing them. While we can never truly know what it was like to live in the past, small things like carrying 65 pounds of equipment or pretending to barter with guests makes me think empathetically about the primary sources I read and the practices described in them.

The guests themselves often make for many great surprises. I had everyone from college professors to vacationing families in my programs, and no two groups are interested in the same things. Sometimes the guest really wants to hear how our site relates to the Revolutionary War. Even if Fort Loudoun had been destroyed by that point, the historical connection of the French and Indian War to the Revolution keeps them engaged. Even a small detail that you might not think about, like how a soldier washed his clothes, could be something that a guest fixates on once you’ve described a soldier’s uniform. Those questions keep you on your toes and help improve your programing.

While my long-term goal is to enter the academy as a professor, I do think it is vital to involve the public with history. State parks and museums are some of the most popular and engaging ways for doing so. I can see myself working in such an institution if the job market does not pan out and, if I became a faculty member, my experience will help me reach a wider audience.

Being an interpreter, whether as a living historian at a state park or a docent at a museum, requires a lot of socialization. Be ready to deal with people from all walks of life, including those who may have had no exposure to what it is you are talking about. A friendly smile, warm reception, and a few well-placed jokes will take you far. Live by the formula that an old Tennessee state naturalist taught me: interpretation is one third information, one third entertainment, one third inspiration.

In addition to Tennessee State Parks, most museums and national parks have internships or seasonal positions available for those interested in doing interpretive work. For national parks, check out USAJOBS.com, the NPS website, or ask someone involved with the organization. Ask around your History department or reach out to museums directly: you never know who has a connection that can help you out.