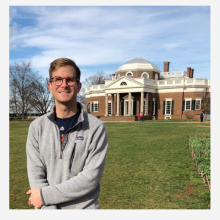 While working on his doctorate degree at the University of Iowa, Paul Renfro was captivated by the story of two young girls who went missing and the language around their disappearance. People saying, “this shouldn’t happen here,” and notions of racial and regional innocence sparked his interest. Stranger Danger discusses the phenomenon of missing children and its resonance beginning in the late seventies and early eighties.

Throughout the eight-year process in writing this book, Dr. Renfro found it emotionally difficult at times to analyze these past disappearances of children. “It is very challenging and disturbing, especially considering that a lot of these cases ended in tragedy, not only in the ultimate tragedy of a child being murdered, but often times many parents discuss the fact that not knowing is harder, so it’s actually a relief when they learn that their child has been murdered. So that very idea is very unsettling.” Stranger Danger works to deconstruct the fears many parents have about protecting their children from this “perceived threat,” explaining how a child is far more likely to be abducted by a family member, be a runaway, or be thrown out of their house than be taken by a stranger. The book explores how the stranger danger rhetoric obscures these facts, thus creating a legal and cultural regime that addresses this exceptionally rare sort of crime.

Stranger Danger dissects the culture surrounding missing children, its effects on American politics, and vice versa. The book, available for preorder from Oxford University Press (https://bit.ly/3aE3JMp), has already received stellar reviews from various well-known academics such as Pulitzer Prize winner Heather Anne Thompson. Dr. Renfro hopes the reader takes away, “that childhood can be political and that innocence can be political and that often times our fears can unleash really dangerous things.”