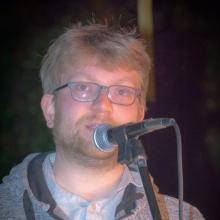 Each student’s academic path is unique, but Emile Boghos’ path to graduation has been especially so. After taking a few years off to work on political campaigns, Emile is graduating this Fall 2020 semester with a bachelor’s degree in history. While he enjoyed working on campaigns, he met with limitations, noting, “You do kind of hit a wall as far as where campaigns will let you advance when you don’t have that four-year degree.” Once he had decided to complete his bachelor’s degree, he considered going into politics or higher education. However, his time on campaigns encouraged him to pursue history. “I had done a lot of political work and I got drawn into reading history on my own,” he explained. “I really wanted to understand the context of the policies I was working on in campaigns. [History] was more appealing to me than going a political science route, so I could unpack where these issues stemmed from.”

Emile notes that history at the college level looks very different from what he experienced in his high school “You know the dates World War Two started and ended, but you don’t think much about the ramifications it had on society long term, what it was like for soldiers coming home to still see Jim Crow enforced in their own states. It's these kinds of stories, these currents that connect past, present, and future that you can’t get from memorizing dates and names.”

When Emile returned to the classroom, his nerves were put at ease when he unexpectedly developed a passion for Latin American history. “I took a class with [Dr. Robinson Herrera] my first semester back, and I was sitting there petrified, feeling ancient because I was a decade older than everyone sitting around me, but all that faded away because the class was so great.” His first foray into pre-Columbian societies in the Americas put him on a path towards studying Latin American history, though that was not his initial intention. “I didn’t expect it when I first re-enrolled, I thought I was going to study Civil Rights era United States, which is still something I’m really interested in, but I ended up falling in love with Central and South American history, especially pre-Columbian. I thought it was really fascinating, a lot of stories lost to time and an active destruction of their resources.” His newly developed passion for Latin American history did not stifle his passion for political justice, however. In fact, his time studying the New Jim Crow with Dr. Maxine Jones set him onto a path towards helping people through law: “Once I realized that was something I really wanted to do, I didn’t look back at all.”

With the long-term goal of working in criminal defense, Emile has submitted his applications for law school and is waiting to hear back. As a history major, he cultivated key skills of writing and communication that he feels will help him in law school, emphasizing that “the skills you learn [in a history degree] are universal, especially your ability to write succinctly, to condense and pack a lot of information into a really small package. My favorite expression is “words mean things” so you do have to pick them very deliberately… that ability to really condense and make sure every word you’re putting in a paper is packing the appropriate punch, is something I think is absolutely essential.”

With these written and oral communication skills, Emile is looking forward to a degree in criminal defense. His primary passion is in ensuring the law is consistently applied, “and not just to people who can afford access to the top-tier lawyers,” he adds. Laughing about the stereotypes surrounding lawyers, he hopes to one day work with organizations like the ACLU and Southern Poverty Law Center, adding that he would be happy at a smaller firm as long as it fulfills his passions: “To me it’s more important to do something that I feel is important, socially speaking, and not necessarily just chasing where the money is.”

For now, while he waits to hear back from his applications to law school, he is feeling hopeful. Ideally, he’d like to at least start out in a public defender’s office. His path through his undergraduate degree may not be the typical one, but he is glad for the extra time he had to determine his course. “It’s important not to panic or think you should have accomplished a certain set of things by a certain age. Because you can end up forcing things, or with a degree, you’re not happy with, or pigeonholing yourself before you're ready to commit.” For students who may also not have the typical undergraduate experience, Emile suggests flexibility. “Don’t come in thinking you know what your path will be. I started with no idea I would end up really passionate about Latin American history or even end up going into law when it was all done. Have that open mind and let yourself really evaluate where your interests are.” For history majors in general, Emile advises keeping an open mind on your area of focus, stressing “You never know where you’re going to fall in love. I was not expecting to want to study Latin American history, but I really, really love it. So, I say: have an open mind when you start these classes and take every one of them as seriously as you can, because you never know what you’re going to fall in love with and what you can learn. It can take you weird, wacky, wonderful places.”