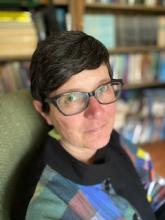 Dr. Suzanne Sinke serves as the History Department’s Associate Chair for Graduate Studies. She is a historian of migration and gender studies in the U.S. context. She received her MA from Kent State University in 1983, and her PhD from University of Minnesota, Twin Cities in 1993. She joined FSU in 2002.

How did you know you wanted to do a PhD and become a historian?

I was singularly committed to becoming a teacher of history from childhood. The question was only at which level, and I started my undergraduate studies planning to be a high school teacher.

Once I completed an MA, I took a year to think about whether I really wanted to go on given poor job prospects and challenges of living on minimal stipends - I was averse to taking out loans. A last-minute adjunct job at a local college convinced me that I really loved college teaching, so I explored graduate programs in much greater depth and found one that offered what I wanted. Once I joined the PhD program at the University of Minnesota, I loved the intellectual challenge and developed a group of graduate student friends.

How did you arrive at your dissertation topic? How much did it change over the course of your graduate career?

As someone interested in migration and gender, I picked questions I could answer using the database my advisor had developed for my MA degree. Then I decided to expand on that general topic with qualitative sources for my dissertation, though my Dutch focus remained the same.

I came into the PhD program with the topic of Dutch immigrant women in the late nineteenth and early twentieth centuries. For my MA I had studied this group based on quantitative data, particularly U.S. census records (a database I had to manipulate on the university mainframe using punch cards). My theoretical framing changed dramatically over the course of my doctoral studies to include a focus on social reproduction. For the dissertation I wanted to find voices rather than just numbers to illustrate women's lives. At that point in time, few archives had made an effort to collect or index for women. I received a fellowship to do research for a year in the Netherlands. I contacted provincial and local archives along with special collections, asking archivists if they had letters or other personal writings by or about non-elite women (particularly those who migrated to the U.S.). Not one responded that they had that in their catalog or memory. So, I spent part of that year looking through archived family collections which "might" include women's letters and generally collecting information on women's experiences in the Netherlands in the period I wanted to study. One like-minded scholar suggested a collection at one provincial location that contained a few women's letters. I located an older, taped set of recordings from a language institute (which included the voices of Dutch immigrants speaking in dialects, transcribed in phonetic script without the questions). The only major collection of letters I found was in the U.S.

How did you master the languages—German and Dutch—required in your studies?

As an undergraduate I took the equivalent of two years of German at an intensive summer program in the U.S. Once in graduate school I attended a Goethe Institute summer course in Konstanz, and later another intensive summer course in Salzburg. Between times I was working on reading literature in the language. After studying German, I spent a year doing research at the Ruhr University in Bochum.

German was also my steppingstone to learning Dutch. I took intensive summer courses for Dutch as well, one in Breukelen and additional training in Venlo. After Dutch language training I spent a year based out of Amsterdam doing dissertation research in the Netherlands. When I returned to the US, I worked with a Dutch language teacher at the University of Minnesota on studying language use in handwritten immigrant letters, and I took part in a translating group, working with a Dutch writer in residence to translate one of his books. Of the summer language courses, the one in Konstanz was my favorite due to the mix of people and the focus on using German exclusively, not just in classroom work, but in weekend extracurricular activities from hiking in the Alps to attending local festivals. I was incredibly fortunate that I could get funding for my language studies and the two years I spent doing research in Europe--all supported by various grants and fellowships, from organizations like DAAD, FLAS, the Dutch government, and the University of Minnesota.

When I started learning languages I would use flash cards, and later I would keep a notebook to write down new vocabulary, grammatical insights, and phrases. I listened to and sang music in the languages as well. When my skills were strong enough, I would read newspapers and novels. I worked to keep up my conversation skills when back in the US by talking to and doing activities with exchange students--plus I wanted to reciprocate for the hospitality people extended to me when I was abroad.

Who or what were you most grateful for that helped you complete your PhD degree?

My parents remained supportive throughout a long graduate school experience. They kept up the encouragement when I was struggling.

Do you think you led an active lifestyle outside of grad school?

I do not think of myself as particularly active, but I tried to get some regular exercise during graduate school to maintain my health. A roommate got me started jogging—at least if the temperature was above 0 degrees. In addition, I would walk about 20 minutes each way to catch a free shuttle bus to campus or ride my bike to my office when the weather allowed. Hiking, canoeing, ice-skating, and cross country skiing I would do very sporadically, though I enjoyed all. The Twin Cities offered an extensive range of trails along the Mississippi and the lakes. But—mostly I was busy studying or serving as a TA.

Music, theater, museums, public lectures—if free or very, very inexpensive—were also a sporadic part of my time in the Twin Cities. Many of the cultural opportunities I attended came through the university, especially those sponsored by the Immigration History Research Center.

What would you tell your pre-grad school self that you wish you had known before becoming a graduate student?

Embrace the opportunities of your institution, your program, and more generally of being a graduate student.

What advice would you give students about handling the challenges of grad student life?

Build your support networks: both academic ones to talk about your work, and personal ones to keep you sane and healthy.