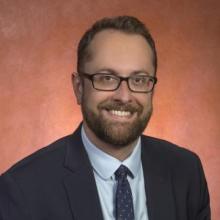 Dr. James Palmer is a late medievalist who works on primarily thirteenth- through fifteenth-century Italy. He received his BA from Michigan State University (MSU) in 2000, MA from Duke University in 2002, and completed his PhD at Washington University in St. Louis in 2015. His dissertation topic was “Gold, Grain, and Grace: Piety and Community in Late Medieval Rome.” Dr. Palmer joined the FSU History Department in 2015.

How did you know you wanted to go to graduate school and become a historian?

I decided I wanted to become a historian pretty early in my undergraduate years, and I first went to grad school straight out of undergrad, but I was not a person with any real understanding of what grad school or academia was really about. I didn’t feel that I had a solid purpose, and I was passively continuing rather than actively pursuing my studies. I quit after becoming ABD at Duke University where I was studying at the time.

I went out, worked other jobs for a number of years before coming back to academia. That time away from school was in many ways crucial to my ability to succeed the second time around. I realized history was the one thing I knew I was passionately interested in. And I liked teaching; teaching felt like it mattered to me. I had also learned some things: I knew I could hold down a job, so I knew that I had options outside academia. I did not feel like ‘I have to succeed, this is the only way forward;’ the other thing I had learned was just how to work, how to be a professional. I knew how to show up and work every day.

How did you manage the grad school workload?

I treated grad school like a job. I’d get up in the morning, I’d work all day, with little breaks, and then in the evening I stopped. Even if you just put in five or six working hours every day, you will get a lot done. It’s just a matter of doing it every day.

What challenges did you wrestle with?

I had two different challenges during my two times in grad school. The first time, it was insecurity. I grew up in rural Michigan and went to undergrad at a state school, and it seemed that everybody I met at Duke had done their BA at some Ivy. The second time around, I was overconfident. I felt like I had done all of this coursework already during my first go-around.

As I discovered later, a third challenge came when I finally got to an archive. The moment you hit an archive, every plan you had before goes out the window. You will be finding stuff you didn’t expect to find, not finding what you wanted to find. This is the moment you have to sit down and figure out what you can do with the material you find.

How did you arrive at your dissertation topic?

The first time in grad school, I was in many ways a classic Renaissance historian, focused on Florence. When I came back to graduate school, I wanted to work on Rome, specifically on the era of the most famous Roman of the late medieval period. I remembered an episode from an undergraduate survey course on European history at MSU: a non-noble Roman citizen by the name of Cola di Rienzo (1313-54) took over the city and became a kind of demagogue. He instigated a big political revolution. Wagner even wrote an opera about him, Rienzi. Ultimately, Cola was killed by the Roman mob, who had become disillusioned with him.

The scene of that killing was etched in my mind. I realized I knew all about Cola di Rienzo, but I didn’t know anything about those Romans who were standing around him. And I wondered, who were these people? From that moment, I knew what I wanted to work on – the people of Rome during that time.

What I didn’t know was that there were almost no sources! All the Roman municipal sources during this period are gone. Mainly because Rome saw a lot of conflict over time which involved the ransacking of government buildings and archives. That was the reason not many people had worked on fourteenth-century Rome –there weren’t many records.

Because I picked my topic in this idiosyncratic way, without reading into the historiography first, it ended up being an extremely hard topic to research. At the same time, though, as a medievalist, the lack of records is a perennial problem. It makes you think creatively about your theoretical and methodological approaches. Things were just a bit more grim in my case than in some others.

How did you figure out what to use in your dissertation from your research at the archive?

I was originally going to write my dissertation on last wills and testaments. Several months into the process, two things happened. First, I began to really doubt that any one was going to hire me if all I could talk about were wills.

Second, I found some very interesting things in the notarial archives that weren't wills. The most interesting of all were elaborate peacemaking rituals, complete with scripts for acting them out and formal lines written in late medieval Romanesco, the local dialect. Almost nothing had ever been written about them. I knew I had to do something with this material but didn’t know how.

I switched my research activity over to combing through as many records as possible and grabbing anything that I thought would be useful. I had about 10 months in Italy overall, thanks to a Fulbright, and I spent most of the second half of that time in this mode.

What was the process of writing your dissertation?

I spent two to two and half years writing it. Once I'd identified various clusters of evidence from within my overall haul, I just started sketching out chapters. I didn’t write it in any kind of order. I wrote the peacemaking chapter first. I had no publications at that point, aside from a book review, and I thought the material was interesting and novel enough that I could publish it on its own.

After that, I just started pulling together evidence on various topics from everything I had gathered, just to see what I really had. I was probably working at this for close to nine months before I finally figured out what the dissertation would be about. I got there mostly through talking to my wife. Honestly, without those conversations, I would not have had any idea about how to organize and write the dissertation. That ongoing discussion eventually led to a breakthrough.

Eventually, I identified all the topics I would write about: peacemaking rituals, wills, private family chapels, houses of women living collectively - a wide variety of things. Once I had all the chapters at least drafted, I had a clearer sense of what I was really trying to say. The introduction and conclusion were easy to write.

I was able to figure it out because I had people around me - a support network - whom I’d talk to and they gave me advice—aside from my wife, it was mostly other graduate students; those from other programs; people I knew from Italy.

What was your academic advisor’s role in all of this?

Daniel Bornstein, my advisor, largely trusted me to handle things as I saw fit. I tended to regularly check in with him, at least when I was in St. Louis, and talk about whatever I was working on. So, he never really had to hound me to keep working or chase after me for updates. When we talked, he often pointed me toward helpful secondary or theoretical literature. Basically, I forged ahead with my dissertation writing and whenever I was stuck, we talked. We had an easy-going relationship. I still turn to him for advice today. He told me after I got hired at FSU that he planned to keep mentoring me all the way through to tenure, and that's exactly what he did.

What is your advice for current graduate students?

So often in grad school, when you get an assignment, the temptation is to just write it and turn it in because you have to - and I did this too. But you might want to think to yourself, if I want to be a historian, I need to work like one. I need to take this assignment seriously as an intellectual exercise. It’s not enough just to ‘do the assignment.’ Once it’s written, you need to sit down and think, is this good enough for publication? Is this a serious intervention? Am I saying things clearly enough? Am I saying them well?

In many ways, academics is like athletics: you will play the game the way you practice the game. Treat assignments like they are real scholarship. Every single paper becomes an exercise for you to explore your own voice as a historian: how am I going to argue? How am I going to approach this? Then, when you get out into the field to do dissertation research, you have the right attitude, and you have experience.

The archive will be a crucible that changes you still further. If you haven’t done the preliminary work, I think the archival work will just be utterly overwhelming.

If you could go back in time and speak with your younger self in graduate school, what would you tell him?

Looking back, I think it was important for me to leave grad school and come back to it. I don’t think I would try and prevent that.

The one thing that I would tell my younger self is that everything will be okay, no matter what happens. Most of the things that look like success or failure in academia do not necessarily reflect your own ability to be a good researcher, writer, or teacher. A lot has to do with random things: availability of archives, trends in university hiring, trends in publishing. None of that has to do with how good you are. Therefore, if you enjoy doing history, just do it. Whatever happens will happen, and it will be fine.

And finally, what were some of your fond memories about grad school?

There are so many things about grad school that are uniquely wonderful, as long as you are properly supported. I was lucky to go to an institution in a fairly affordable city. The monetary support was good enough that I could keep myself afloat without much stress, enabling me to just focus on work. It was a small program, so you got a lot of attention (if you wanted it) and all the grad students knew each other pretty well. I still have a lot of good friends from those days.

In the end, grad school was several years of trying to grow as a scholar and pursue my fundamental interest in history and learn how to teach and mentor students. And, of course, I got to live in Rome and sit for months in the Vatican and other Roman archives reading centuries-old documents. Research in Italy was wonderful and difficult, rewarding, and frustrating. Nothing beats the feeling of unfolding a 600-year-old parchment, but getting to the point where people will let you takes some doing.

Also, for a guy who loves to cook as much as I do, Italy is paradise. When I was there, I didn't know if I'd ever get the chance to do it again because I never knew if there would be an academic job at the end. But knowing that, meant that I really cherished it while I had it and I remember it fondly now. 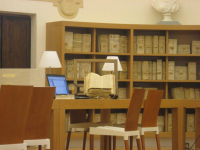 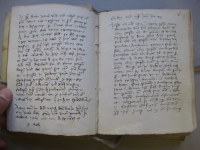