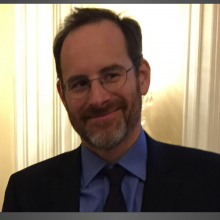 Dr. Ed Gray is a historian specializing in early American history. He received his AB from University of Chicago in 1988 and PhD from Brown University in 1996. He joined FSU in 1998 and has been the chair of the History Department since 2013.

What is your research interest?

I'm a historian of early America. My work covers European contact with early America in the latter part of the 16th century through the early 19th century. I teach mostly colonial and revolutionary era US history. I'm currently writing a book on the history of the Mason-Dixon Line. It ends with the Civil War, so I'm moving a bit further into the modern era.

How did you decide which field to focus on in graduate school?

In college, I didn't focus on early America. Among the books I read as an undergraduate, one stood out: The Creation of the American Republic by Gordon Wood. I found it unbelievably interesting, and it drew me to early American history. The book was about the ideological foundation of the American form of government. That really captured my interest: the history of politics, political thoughts, and the origin of democratic republican government. When I applied to grad school, I applied to institutions with scholars focusing on the American revolution. I ended up going to where Gordon Wood was a professor, and he became my graduate advisor.

I've come to appreciate many aspects of early American history through teaching. I find it enjoyable to share with students elements that distinguish this period from more modern periods in American history. The 17th and 18th centuries experienced intense upheaval but also much continuity—change in the early-modern world came much more incrementally than it does in the modern world. It's at once a different and distant place where people talk about witchcraft and strange religious beliefs, but also a place in which the institutions that we live with, like the law and system of government originate. This duality of distance and proximity to the present is what interests me.

What challenges did you encounter in grad school?

I had a terrible time doing my preliminary exams; they were disastrous. I had no idea how to prepare for the exams. I had no idea what was expected of me and failed the first-time round. I couldn't assimilate the amount of information I was asked to assimilate. I couldn't understand, and I wasn't sure how or why my limitations prevented me from seeing what my fellow grad students could see. The second time I limped through. In the note informing the Brown History Department that I finally passed, my advisor wrote, and I quote, "Gray’s not fast on his feet but he did well enough to pass." I still have that note, a prized possession!

Finding my dissertation topic was also hard. I was trying to select something my advisor was interested in. In the end, he said to me, "Ed, you need to work on what matters to you and forget about me. You have to live with it, not me. I just have to read it when you are done." That was the best thing he could have said to me. It was an incredibly liberating moment. I ended up writing a dissertation that could hardly have been further from my advisor’s area of expertise

My dissertation was about the study of American Indian languages in the 17th and 18th centuries. Gordon Wood is a historian of politics and constitutions. I was interested in the philosophical questions about what language is, what language says about people's minds. I wrote a few chapters along those lines and turned them in to my major professor. I was unsure how he would receive them. I thought this was a make-or-break situation, and that if it didn't work out, I'd have to leave academia. But I was fortunate that everything turned out fine.

Besides your major professor, to whom did you turn for intellectual support?

I became affiliated with the John Carter Brown Research Library at Brown and started to work there as a summer grad assistant. I met its director, Norman Fiering, who was also an early American historian. In many ways, his work was much closer to the topics and methodologies I was exploring than my major professor's. I connected with him and was able to share my ideas.

How easy was it to find a tenure-track position?

I began applying for jobs during my final year in graduate school. It took me three years to find the position here at FSU. I was actually the second choice for that position, but fortunately for me, the other candidate took up a job elsewhere. The academic job market at that time was not great. The year I got hired at FSU, there were about 10 to 15 nationally-advertised jobs in the whole country in early American history. One reason I ranked so highly for the FSU job was because my dissertation had been immediately accepted for publication by Princeton University Press. I was incredibly fortunate. I got a contract with the publisher as I was finishing my PhD. At that time, that was very unusual and placed me in a higher tier among the applicants for the job.

Can you elaborate on the performative aspects of the job search?

Professors are performers; you have to perform in front of an audience all the time. You do that as a teacher lecturing to students; you do that when you give papers at conferences. On-campus interviews are also performative encounters. As a recent PhD, I had no concept of this basic truth. I thought I was being hired for my ability to sit in libraries and write scholarly tomes. In fact, when it comes to the academic job market, one’s ability to perform—I don’t mean to act in a showy, theatric way but rather to share one’s scholarly work with an audience of widely varying levels of interest—is the often the crucial divide between those who find academic employment and those who don’t. You're expected when you get hired at FSU or any other major research universities to give "a job talk." It's a very prosaic and bland-sounding thing. I had no idea what I was supposed to do at the time, so I gave a paper based on some work I'd done for an edited volume. I had no idea that the purpose of this was to demonstrate to my potential employers that I could explain to a roomful of people in a clear and coherent way my area of expertise. I had to show that I could capture the interest of people who were not familiar with my work.

This job talk, it is a performance, and it's a Fred Astaire situation. Astaire once famously said, "This looks so easy because I worked so hard." This is true for these kinds of performative encounters. There are people who appear to have no problem, because they have practiced hard and figured out how to do it. Something I didn't understand at the time was that most of the people listening to me had absolutely no idea who I was or what I did. This was literally the first and only opportunity they had to get any sense of my work and how I would be in a classroom. All of that makes this 50–90 minute encounter a crucial moment in the hiring process.

How does teaching complement your academic research?

I was trained at a place by an advisor who was a very skilled lecturer. His basic guiding assumption was that if you knew your material because you were a good scholar, you would be fine in the classroom. So, when I was training to be a historian, I spent all my time worrying about whether I had mastery over my subject matter, my archival material. I spent less time thinking about teaching. I didn't realize how central teaching would be to my own intellectual enterprise. Now I know otherwise.

Teaching is vital to my intellectual development and my evolution as a scholar. One reason is that I realized early on that there's no real reason for anyone to be interested in what I do. I live in a distant past; I toil away and try to understand behavior and thinking of people who had very different values from us today. In order to persuade undergraduates who live in a very different time period that this is actually interesting, I have to convey the excitement of historical discovery with them. There's a lot of mis- and preconceptions that one has to overcome, particularly when teaching a survey course, as I have been doing all my career, particularly to students majoring in everything but history. I learned early on that when students say a class is hard what they mean is that it's very boring. And students often regard history as hard, in this sense.

Thinking about developing strategies to communicate my enthusiasm to undergrads with no earthly reasons to be interested in the material has shaped the way I teach. It's helped me present my work in a clear and engaging fashion. In the beginning, I was nervous because I thought that the students had a story in their minds about US history that I had to speak to. But over time I came to realize that most come with a clean slate, and I could share my narrative with them afresh.

What advice would you give your younger self in grad school?

I would tell myself that you need to discriminate between the things you can control and the things you cannot. You can't control the personalities of those you work with, you can only control yourself and your responses. Identify what you can control that is stimulating to you and try to do it well. Don't pick on yourself, be tolerant of your own path. Don't think that there is only one correct way forward.

When undergraduate students come to me and say they want to be a history professor, I tell them, "Wanting to be a professor is a lot like wanting to be an actor." Both are very low yield undertakings. If you want to go into show business, you better get ready to spend years in community theater or working as a waiter. Training to be an academic is very similar. It involves a lot of drudgery and sacrifices. You need to be working on something that you are completely enthralled by, that you love, to help you get through the time before the first job.