On Research in Rome & the Importance of History: Dr. James Palmer talked to Kendra Jade Evers 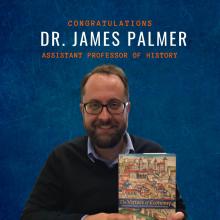 In an interview discussing his new book, The Virtues of Economy: Governance, Power, and Piety in Late Medieval Rome (Cornell University Press, 2019), James Palmer explained the long road to its publication. Palmer, currently an assistant professor in the History Department at FSU spent the better part of the 2010s researching and writing the book. James Palmer was also emphatic about the importance of history for our society today. The study of history will equip students “to live critically in the world that they are in.”

Dr. Palmer began college as a forestry major but realized quickly that this field did not suit him. While reconsidering his major, he spoke with many professors, including Chris Celenza, who taught Renaissance Italy. Palmer stated that Professor Celenza “took me under his wing,” and inspired him to follow in his footsteps to Italy. Palmer recollects that when he decided eventually to go into history, nobody in his family was surprised but he himself.

Palmer’s book began its life as his doctoral dissertation. After he graduated, Palmer waited a year before opening it again. This allowed him to look at his dissertation with fresh eyes. He realized that to turn it into a successful manuscript, he would need to revise the way he framed of his research. Palmer spent two further years rewriting it. Between researching and writing the original dissertation, revising that, writing press proposals, editing, deciding on cover images, and responding to reader reports, he had been working on this book for almost a decade.

Palmer structured The Virtues of Economy around the argument that the return of a papacy long absent in Avignon was not the reason for the transformation of Rome at the end of the fourteenth century.  In this he is challenging a widely held popular myth. Rather, his research finds that this rise was the result of political decisions by local elites involved in the Roman economy. These elites were eager to protect their own power and social status and came to believe that they could best do so in conjunction with the pope.

While he was researching his book, Palmer not only lived in Rome but worked within the Vatican itself. He describes it as a beautiful but somewhat intimidating environment. He explained that he was very conscious of where he was, and very careful to be respectful. Often, when he requested records from the Vatican archive, it was from sections that had not yet been completely catalogued. His research efforts ended up helping the Vatican take stock of their own collections.

Palmer was very concerned with historical labeling. When asked to clarify the time period “late medieval,” Palmer explained that he means the fourteenth century. While late medieval and Renaissance intersect, Palmer does not see the term ‘Renaissance’ as a useful reference point. He himself takes issue with being described as either a Renaissance historian or an Italianist. With regards to the former, he stressed the difficulty of using the Renaissance as a concrete time period. As to the latter, he notes that Italy as a nation did not exist until the late nineteenth century, over four hundred years after the time period covered in his book.

Palmer’s path to becoming a historian was unorthodox - after all, he started as a forestry major. Changing majors meant it took him five years to graduate. He took four years of Latin in two, and he left his first graduate program after a few years, only to return to graduate school several years later and follow his passion. He focused on an aspect of history, late-medieval Rome, that would interested him personally, rather than a topic that might have had better job prospects.

Studying history is crucial, Palmer argues. People in power tend to use to history as the basis for their actions. But that history might not be real. Indeed, people who shape history into a grand narrative tend to have an agenda. They have their conclusion and carefully select only the facts that support that outcome. Learning to think critically about history frees people to form their own views.