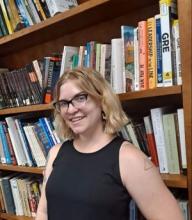 Madeleine Stout is doctoral student in the department working under the supervision of Dr. Michael Creswell.

Tell us about your major area of research!

My area of research is on 20th century U.S and Russian history, more specifically the influence of the Black Freedom Struggle on foreign policy and the widespread use of propaganda on both sides during the Cold War. I have always had an interest in Russia during the 1900s and the complex relationship between truth and propaganda, The first works that showed me this area of research was a viable topic were Carol Anderson’s Eyes off the Prize and Mary Dudziak’s Cold War Civil Rights.

What minor fields did you chose?

My minor fields are U.S. History until 1877, Modern Europe, and Gender and Sexuality. I chose these fields because of their significance to my research. Europe was one of the propaganda battle grounds of the Cold War. Women were often used in propaganda to sway public opinion, and gender norms in the 20th century influenced these depictions. Additionally, many of the grassroots activists in the Black Freedom struggle were women, and some even ventured to the Soviet Union. Early U.S. history contextualizes the growing use of propaganda foreign policy, as well as the relationship between the Black Freedom Struggle and the international stage.

How did your interest in history start more generally? What do you do for 'fun' history nowadays?

My mother was a history major in the 1970s, and history was always a subject at the dinner table. I recently finished watching the second season of ‘The Great’ for fun and thoroughly enjoyed its portrayal of Catherine the Great and imperial Russia. I like reading 19th- and 20th-century Russian literature to get an understanding of Russian culture.

What do you do as an HGSA officer? What does your job entail?

I am the communications officer for the HGSA. It involves a lot of social media posting and event coordinating.

How do you see HGSA make a difference to grad student life?

I see the HGSA as a resource for graduate students, both academically and socially. It takes a village to earn a graduate degree and you need to find ways to unwind and take a break to avoid burnout. I think the HGSA really helps grad students do that.