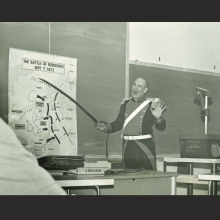 Donald Horward was a leading figure in the field of Napoleonic studies for nearly a half century. Horward had a distinctive approach to the life and craft of the historian: a stronger, more fraternal obligation to the student, true patronage of the library, and ultimately, stewardship of the field. Horward was a pioneer. Not only did he work in collaboration with his peers, he struck his own path. Horward’s efforts, more than any other single individual in the 20th century, elevated Napoleonic studies in the United States to new prominence. This would not have happened without his unique drive, ambition, and dedication to both his students and the wider profession. His legacy lives on because he poured his passion into institution-building.

Donald Horward made his mark through those institutions. He first established the rare-book Napoleon Collection at Strozier Library, one of the world’s largest collections of Napoleonic-era texts. Next, he helped organize the Consortium on Revolutionary Europe, the world’s largest academic association devoted to the study of the Age of Revolutions (1750-1850). Finally, he founded the Institute on Napoleon and the French Revolution at Florida State University, the only graduate program devoted exclusively to those areas of history.

Horward’s expertise was unique. His connection with West Point gave him real influence over U.S. Army doctrine. As a result of Horward’s decades of work with the premier officer school in the country, Napoleon’s operational methods became a priority in the education of America’s finest young officers. He eventually leveraged this influence to create a one-of-a-kind program, bringing officers to FSU to conduct doctoral research and then return to the Academy to teach new cohorts of cadets each and every year. Horward’s military graduates, all U.S. Army officers, propagated his philosophy at West Point. Horward also developed a special relationship with the Virginia Military Institute, as well as with the Naval, Air, Marine, and Army War Colleges. Because of these institutional ties, Horward’s work had a real impact outside of academia.

The French government appreciated his efforts on behalf of their country’s history.  He first earned the French Ordre des Palmes Académiques, a medal instituted by Napoleon Bonaparte in 1808. France later bestowed on him the Légion d’honneur, which he called the most unique medal in the world, founded by Napoleon in 1802. On this achievement he wrote:

“I had the surprise of my life last month when I received letters from President Chirac’s cabinet director and the French Ambassador to the U.S. ... It would be an understatement to say that this recognition is the most important and unique event of my career. To study Napoleon my entire life and to be the recipient of the first and highest award he created is truly overwhelming. Having introduced almost 16,000 students to Napoleon in my classes and directing some eighty doctorates and M.A.’s on the topic, I have a special appreciation for this honor…It represents not only the medal of Napoleon, the French Presidents, and recognizes the extraordinary acts of heroism on the battlefield, but it is also the medal of Mme. Curie, Pasture, Berlioz, and Dreyfus.”

Horward was not a part-time historian. When he went home at the end of the day, he did not leave history in the classroom; he lived it, he breathed it. He belonged to a generation that knew there was a reason for everything we learned, and he was going to make sure you knew it too. He received the first Florida State University Standard Oil Award for Excellence in Teaching in 1967, followed by a second university teaching award in 1988, and the title of Distinguished Teaching Professor in 1990. Mike Leggiere said it best when he wrote:

“I’ve never met a professor that cares more about students both graduate and undergraduate. He develops a personal and genuine concern, not only for their scholastic, but personal welfare. I think if FSU was full of faculty such as Dr. Horward, it would be one of the best learning institutions in the nation.”

“Because of his special expertise on Napoleon, we have asked him to give a lecture to some 100 upper-class cadets on the Peninsular War and to some 700 freshman cadets on Napoleon. His relaxed style of lecturing and his sincere and deep interest in the subjects proved to be a “hit” with the cadets and stimulated their interest in this important period.”

It was a serendipitous set of circumstances that drove Horward’s life. He was a true 18th-century man in every sense of the word.He created something that would entrench Napoleonic studies in the academic mainstream for the long term. But in the end, it all came back to the students. He remarked that his students were like his children. Dr. Horward would point to a row of doctoral dissertations, all bound in blue, each covering an aspect of the Revolution and Empire. “My children, the Doctors,” he would say with a smile. When the final doctoral student, Paul Reese, successfully defended his 400-page dissertation and graduated in April 2007, Horward commented with relief, “Now, I have completed my duty to my students. May they enjoy the profession and pursuit of Napoleon as much as I have for fifty years.” May he rest in peace, rightfully confident that his students will carry on his legacy.