Black History Month: The Story of the Tallahassee Sit-In 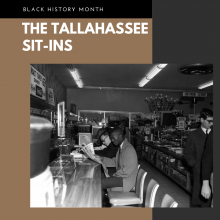 The desegregation of schools, public transport, and public areas in America began in the 1950s. Integration faced significant pushback. College students across America participated in various forms of protest. In Tallahassee sit-ins became an important way to protest.

The first widely publicized Civil Rights sit-in occurred on Feb. 1, 1960, when four African-American students, later deemed the “Greensboro Four,” from North Carolina Agricultural and Technical College sat down at their local Woolworth lunch counter for a meal. At this time, the official Woolworth policy was to refuse service to anyone who was not white. When the four young men were denied service and asked to leave, they refused to give up their seats. Then, police were called to the scene.

The police were unable to take action against the men due to the peaceful nature of their protests. The Greensboro Four remained seated until the store closed, and their actions were covered in local and national news outlets.The four young men returned the next day with more students from local colleges.

The Greensboro Four inspired thousands of college students across the South. In Tallahassee, students from local high schools and from Florida A&M University supported the call for a region-wide sympathy sit-in. On Feb. 13, 1960, these students took to the Woolworth on Monroe Street and sat at its lunch counter. The sit-in lasted nearly two and a half hours and ended peacefully.

In Tallahassee, the local chapter of the Congress for Racial Equality, CORE, organized a follow-up protest a week later. When the students returned to the lunch counter, they were met by the mayor of Tallahassee and police determined to enforce segregation. The students refused to leave, and all 11 were charged with unlawful assembly and disturbing the peace by riotous conduct. A local minister, Rev. Daniel B. Speed, who as leader of the Inter-Civic Council and heavily involved in civil rights protests, including the Tallahassee Bus Boycott in 1956, would later bail out the students.

Despite the arrests, the sit-ins continued. On March 12, 1960, members of CORE from FAMU and several white students form FSU joined together to create an interracial sit-in. At Woolworth’s, the Tallahassee police department arrested them. Following these arrests, a number of FAMU students gathered outside the jail in silent protest. Also, a number of FAMU students returned to Woolworth’s to conduct another sit-in. Later, on the same day, a much larger group of students was stopped and attacked by police with tear gas. More students were arrested.

The 11 students arrested on Feb. 20 were tried and found guilty on March 17, 1960. Three paid the fine; the other eight served 49 days at the Leon County Jail. They were the first sit-in group in the country to go to jail. One of them was Patricia Stephens Due whose eyesight had been permanently damaged by the earlier teargassing. Due wrote “A Letter from Leon County Jail” explaining her refusal to pay a fine and thus bringing national awareness to the harshness of race relations in Tallahassee. The “Jail-No-Bail” stand garnered nation-wide support. Due served as an inspiration to many students within the Civil Rights Movement nationally.

If you’d like to know more about the Tallahassee sit-ins and Patricia Stephens Due, this is what we have been reading:

Glenda Alice Rabby, The Pain and the Promise: The Struggle for Civil Rights in Tallahassee, Florida, 1999 (reprint 2016)

Tananarive Due and Patricia Stephens Due, Freedom in the Family: A Mother-Daughter Memoir of the Fight for Civil Rights, 1987 (reprint 2009)