Black History Month: The Story of the Tallahassee Bus Boycott 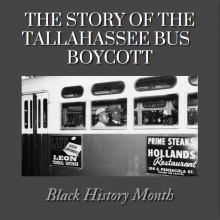 In the decade after World War II, Tallahassee was a segregated town. This segregation included the seating arrangements of passengers on city buses: white people sat in the front, and Black people had to sit in the back. The Civil Rights Movement protesting such laws in Southern states began in 1954, and in 1955, Rosa Parks refused to give up her seat on a Montgomery city bus. Five months later, two women took similar action in Tallahassee.

On May 27, 1956, Wilhelmina Jakes and Carrie Patterson, two African-American students from Florida Agricultural and Mechanical University (FAMU), a historically Black university in Tallahassee, boarded a local city bus. The two women took the only two vacant seats, which were in the whites-only section. Upon being told that they needed to move to the back to stand or leave without getting their fare returned, the two women refused. Since they refused to leave their seats, the police were called by the bus driver. Once three police cars had arrived, Jakes and Patterson were arrested on the charge of inciting a riot and were released on bond later that same day.

The next morning, Reverend C.K. Steele, representative of the National Association for the Advancement of Colored People (NAACP), visited the two women at their shared home and expressed the NAACP’s support for the pair. That same night, a cross was set aflame in their front yard. Jakes and Patterson sought safe housing on the FAMU campus for the night, where the news of the cross-burning spread amongst the students. FAMU students assembled to discuss what actions they should take in response. The students decided that they would refrain from riding the city buses until the semester had ended, and on May 28, the boycott began.

Word of the boycott spread around the African-American community in Tallahassee, and a meeting on whether to join the student-led boycott was held the night of May 29. The vote to do so was unopposed. This initiative led to the founding of the Inter-Civic Council (ICC). Its objectives were: equal access to seating, equal number of hires of African-American bus drivers, and courteous treatment while riding the bus. Reverend Daniel B. Speed joined Reverend C.K. Steele as leader of the boycott, and together they set specific guidelines for the protest to be completely peaceful.

During the boycott, a carpool was set up to be in place of the buses to allow African Americans to get to work. Many of the drivers were arrested and charged with running taxis without a license, although the drivers did not get paid. All in all, 21 people were picked up for illegal activities, including carpool drivers, members of ICC Executive Committee, and Reverends Speed and Steele. The two clergymen had to come up with $11,000 to bail out and pay all the legal fees. Once released on bond, the carpool drivers resumed their work which allowed the bus boycott to continue.

Gradually, the Tallahassee Bus Boycott and its organizers began to see their objectives met. In month three of the boycott, their demand that African Americans could be hired as bus drivers was fulfilled. It became increasingly obvious to the city that lack of African-American patronage of the public transportation system led to significant financial loss. If it continued for much longer the Cities Transit Company in Tallahassee would be forced out of business. Despite police intimidation, the boycott continued until on December 22, 1956, the U.S. Supreme Court ruled that segregation on city buses was unconstitutional.

At that time, the ICC declared that African-Americans would return to the Tallahassee buses – but only on a non-segregated basis. The City Commission responded by making all seats on the bus ‘by driver assignment only.’ Three students testing this seat-assignment ordinance were arrested. The process of integration on the buses took many more months, with African-Americans gradually returning to Tallahassee’s buses, and the seating ordinance being less rigorously enforced. The cases against Jakes and Patterson were remanded to FAMU and later dropped.

If you’d like to know more about Tallahassee and the Civil Rights Movement, this is what we have been reading:

Glenda Alice Rabby, The Pain and the Promise: The Struggle for Civil Rights in Tallahassee, Florida, 1999 (reprint 2016).

Charles U. Smith and Lewis M. Killian, The Tallahassee Bus Boycott: Field Reports on Desegregation in the South, 1958.