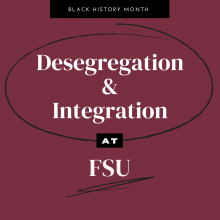 In the 1960s, Black students began enrolling at Florida State University. Their presence challenged the prevailing racism in the student body and administration and began a permanent change in university life. After Southern states ignored or worked around Brown v. Board of Education (1954), Congress passed the Civil Rights Act of 1964 to enforce desegregation. White-only two-year colleges in Florida responded by mandating entrance tests and cutoff scores that created obstacles for nonwhite students seeking admission. In 1977, Adams v. Califano found the state of Florida still had “not achieved desegregation or submitted acceptable and adequate desegregation plans” for higher education. In this case, Judge John Pratt ruled that North Carolina and five other states should stop receiving federal funds until they complied with the Civil Rights Act of 1964, Title VI by increase black enrollment at predominately white public colleges and universities.

Integration at FSU occurred slowly and in stages. In 1962, 12 African-American teachers officially integrated the university by enrolling in graduate-level science classes. The same year, 18-year-old Maxwell Courtney of Tallahassee became FSU’s first African-American undergraduate. Courtney, and other Black students in the years that followed, faced many difficulties as part of an overwhelming white student body accustomed to life in the segregated South. Yet, even as Courtney endured prejudice and discrimination, he was involved in student government and wrote for the student newspaper, the Florida Flambeau.

Challenges to the status quo at FSU were led by Black students and educators through protests and sit-ins. While some of the protests were violent, others were peaceful. The 1971 protest outside of Westcott Fountain fell into the latter category. Organized by Black students, it called for the end of discriminatory actions on FSU’s campus. In this talk-in, the protestors demanded the reinstatement of Andrews, FSU’s first Black cheerleader, who had not been reappointed after two seasons on the squad. They asked, too, for amnesty for two Black students accused of assaulting a white student at a rally on campus. Both issues were handled by then-President Stanley Marshall and the administration in a manner that helped de-escalate tensions. Desegregation at FSU was no simple task, but the courageous individuals who challenged accepted racial barriers paved the way for integration.

Integration of faculty occurred slowly and lagged behind student integration. When the Florida Board of Regents made the controversial decision to shutter Florida A&M University’s Law School in 1968, it also failed to live up to its promise that Black professors would not be displaced. When two professors applied for positions at FSU’s law school, just two miles from FAMU's campus, both were rejected.

Despite admitting its first Black students in 1962, it was not until six years later that FSU hired its first two Black faculty members. Tonya A. Harris joined the university in 1968, as the first female African-American nursing instructor. She retired in 2003, as an associate professor. The other was Earl Gordon Logan. He retired in 1989 as professor of sociology and director of Special Programs, Horizons Unlimited, which became a part of Center for Academic Retention and Enhancement.

More African-American faculty were hired during the 1970s and ’80s. The first one to become a dean was James L. “Jack” Gant. Coming in as a temporary instructor in Educational Administration in 1970, he became dean of the College of Education in 1974. Gant retired from his emeritus position in 1994. Today, the overall number of Black faculty at FSU remains relatively low in relation to the overall faculty body.

The challenges of integration and racism did not go away, but the enrollment of African-Americans students slowly increased at the institution. By the late 1970s, FSU had the largest population of Black students in the State University System of Florida outside of the Historically Black Colleges and Universities.

Today, FSU is home to a diverse student body that continues to engage with the institution’s history. The projects of desegregation and integration at FSU demand our ongoing attention and involvement. Only through engagement and honesty can we continue to make strides towards curbing discrimination on campus. Taking a personal stance against racism in conjunction with official initiatives, like President Thrasher’s Task Force on Anti-Racism, Equality, and Inclusion, will allow us to work for a better future. In the process, let’s remember the many trailblazers who bravely broke down barriers at FSU since the 1960s.

For more information go to: