From a Band in Athens to a Doctorate at FSU: Dr. John Cable talks to Kendra Jade Evers 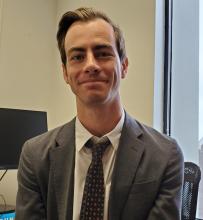 John Cable was traveling with a band in Athens, Georgia. The bass player, majoring in Social Science Education, brought numerous books to their room. Dr. Cable grabbed one and began reading. This is how his love for history started.

After getting married, he returned to school. He chose History over his initial major in Music Performance. Dr. Cable was drawn to the history of Civil Rights. In college, he studied with a professor specializing in the African Diaspora. From there he completed his undergrad and MA degree at FSU. Dr. Cable was sure about the topic of his dissertation: A grand, overarching re-framing of American Civil Rights history as a story of colonization and decolonization of the United States.

After discussions with his doctoral committee, Dr. Cable decided to narrow the focus of his research. He concentrated on a detailed study of Neshoba County, a site important to Civil Rights groups such as the Student Nonviolent Coordinating Committee. There three of its founding members were killed. As a twist, John Cable compared Neshoba County to South Africa and Kenya: all three were settler states in one form or another. But John Cable has not given up on the overarching narrative yet. He will pursue this trajectory as his second or third book.

At the close of the interview, Cable spoke on what made the study of history so important to him. Constantly he finds himself “hearing Politicians try and sell people, who are listening to them, ill goods,” and in order to better sell those ill goods “they’ll invent a usable past, as we like to call it. And it may or may not be true.” Studying history allows one to see when the past has been made usable for political purposes.