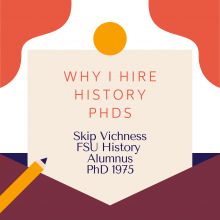 Over the forty years of my career in business, I have interviewed and subsequently hired several PhDs to work in our company.  Even though their areas of study had little, if anything, to do with our business.  In two cases, they ended up becoming equity partners and retired after having very successful careers.

What did I know about these PhDs even before I hired them that were important to me in making the decision to employ them?

Skip Vichness, PhD ’75, earned his degree at FSU while studying under Professor Donald Horward.  In 1979 he entered the children’s summer camp industry.  Since 1990 he has been the CEO of Quality Camping Properties, Inc., and Managing Partner of Greypine, LLC.  In these positions he oversees day and resident camp operations throughout the Northeast.  Skip is one of the largest private camp operators in the United States.