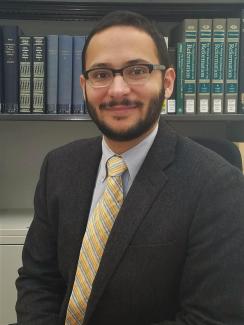 Bio: Maximilian Scholz specializes in the social and religious history of early modern Europe. His first book, Strange Brethren: Refugees, Religious Bonds, and Reformation in Frankfurt, 1554-1608 (forthcoming with University of Virginia Press, 2021) explores the fate and impact of Reformation refugees by looking at one center of refugee life, the German city of Frankfurt am Main. Dr. Scholz contends that refugees determined the nature of the religious changes taking place in sixteenth- and seventeenth-century Europe. He also believes that Europe’s early modern refugee crisis can (and should) inform current debates about displacement and accommodation. You can read Dr. Scholz's 2018 editorial on the history of refugees in Germany, which appeared in FOCUS Magazine, by following this link. His thoughts on Bavaria's efforts to display religious iconography can be found here: link.

Dr. Scholz received his B.A., M.A., M.Phil., and Ph.D. from Yale University. He won a Fulbright Grant for his research in Germany and held a Postdoctoral Fellowship at the Max Planck Institute for the Study of Religious and Ethnic Diversity in Göttingen before coming to FSU. He has since won research grants from the DAAD (2021) and the Stiftung Preußischer Kulturbesitz (2020). His research appears in Migration and Society, Sixteenth Century Journal, and Journal of Urban History, and he has written book reviews for the Sixteenth Century Journal, German Studies Review, and Central European History.