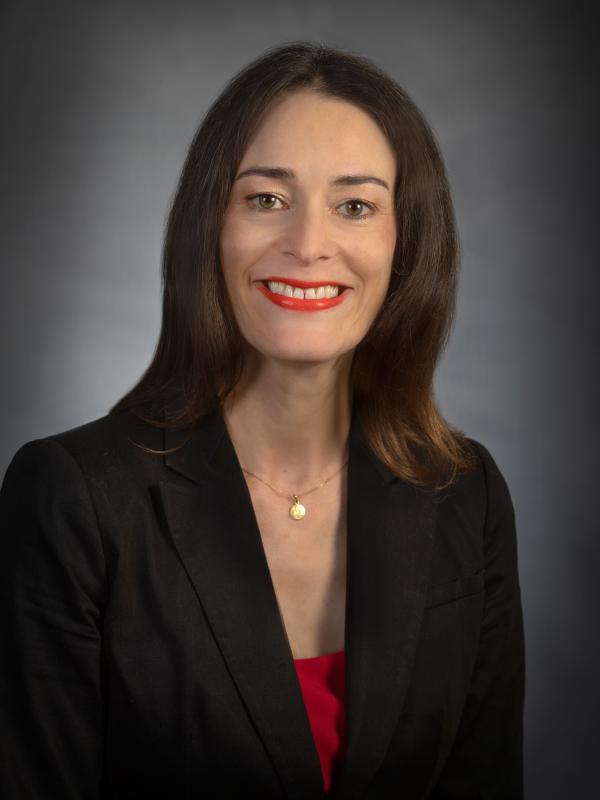 Professor Annika A. Culver is Associate Professor of East Asian History at Florida State University, where she specializes in Japan and Northeast Asia-related topics, as one of the world's experts on imperial Japan and Manchuria/Manchukuo (Japanese-occupied northeast China).  She received her doctorate from the University of Chicago and holds an A.M. degree in Regional Studies East Asia from Harvard University and a history degree from Vassar College. Since 2012, Dr. Culver has served as a scholar in the US-Japan Network for the Future, a group initiated by the late Ezra Vogel which connects academics to the foreign policy community.  She is also an Editorial Board Member of the Texas National Security Review.  Professor Culver's research and publications have focused on propaganda and advertising, cultural production in Manchuria/Manchukuo and the Japanese empire, the history of science in Japan, and more recently, the growth of Japanese consumer capitalism. Her publications include Glorify the Empire:  Japanese Avant-Garde Propaganda in Manchukuo (2013), which won the Southeast Conference for the Association for Asian Studies 2015 Book Prize, the co-edited volume Manchukuo Perspectives: Transnational Approaches to Literary Production (2019), and Japan's Empire of Birds:  Aristocrats, Anglo-Americans, and Transwar Ornithology (2022); her most recent book, Democratizing Luxury:  Name Brands, Advertising, and Consumption in Modern Japan, will be published by University of Hawaii Press in 2023.  The Japan Foundation, Association for Asian Studies, D. Kim Foundation for Science and Technology, and USIIE (Fulbright) and other grants have funded Dr. Culver's research. In addition, Professor Culver regularly gives media and television interviews on East Asian topics, most recently for Voice of America, New York Times, Al Jazeera, and Nikkei News, and regularly presents at national and international venues. Dr. Culver is proficient in Japanese, Mandarin Chinese, French, and German.

Professor Annika A. Culver is Associate Professor of East Asian History at Florida State University, where she specializes in Japan and Northeast Asia-related topics. She received her doctorate from the University of Chicago, and also holds an MA in Regional Studies East Asia (RSEA) from Harvard University, and a history degree from Vassar College. Since 2012, Dr. Culver has served as a scholar in the US-Japan Network for the Future, which connects academics to the foreign policy community.  She is also a Next Generation Fellow (2018-2021) affiliated with the International House-Japan.  Previously, she taught at the University of North Carolina, Skidmore College, Beijing University, and the University of Chicago.  Her research interests include propaganda/advertising, gender and consumption, history of science in modern Japan, Manchuria/Manchukuo, wartime politics and the arts in East Asia, Sino-Japanese relations, and US-Japan relations. As a historian of Japan and East Asia, she has resisted rigid nation-state boundaries with a transnational focus on questions of culture and the use of the arts as propaganda.  Her current work examines how consumer capitalism developed in Japan, and her research on Japanese science delves deeply into questions of empire, and how the rise of the imperial US strengthened rather than destabilized Japanese elites and their society. She regularly gives media and television interviews on East Asian topics, including for Voice of America, New York Times, Al Jazeera, and Nikkei News. In addition, she also serves as a member of the Editorial Board of the Texas National Security Review (TNSR), a prestigious journal published by the University of Texas-Austin specializing in foreign policy and national security issues.

Professor Culver has led digitization projects of collections housed in the Institute on World War II and the Human Experience related to the Asia-Pacific War (1937-1945) and its aftermath, including archiving the Oliver L. Austin Photographic Collection, which features scenes of Japan under the Allied Occupation from the viewpoint of an ornithologist working for SCAP who circulated in aristocratic Japanese circles.  As Curator of the Oliver L. Austin Photographic Collection, Dr. Culver worked with the National Shôwa Museum in Tokyo to set up the March-May 2018 exhibit "A Journey Towards Hope:  Slides of Early Postwar Japan from the Florida State University Archives."  More than 44,000 people visited the exhibit, the second largest number for 2018. For more information, see:  https://www.showakan.go.jp/events/kikakuten/past/past180310.html.

Her book, Glorify the Empire: Japanese Avant-Garde Propaganda in Manchukuo (University of British Columbia Press, 2013; University of Washington Press, 2014), won the Southeast Conference of the Association for Asian Studies (SECAAS) 2015 Book Prize.  It explores how once anti-imperialist Japanese intellectuals produced modernist works celebrating the modernity of a fascist state in occupied China--reflecting a complicated picture of complicity with, and ambivalence towards, Japan’s utopian project.

Dr. Culver recently co-edited a volume of transnational scholarship on the literary production of multi-ethnic writers in Japanese-occupied Northeast China: Manchukuo Perspectives:  Transnational Approaches to Literary Production  (University of Hong Kong Press, 2019) which emphasizes Manchukuo as a cultural and linguistic borderland, where transnationalism became a quotidian practice beyond the binaries of collaboration and resistance: https://hkupress.hku.hk/pro/1584.php.

Professor Culver's second monograph Japan's Empire of Birds:  Aristocrats, Anglo-Americans, and Transwar Ornithology (Bloomsbury Press, SOAS Studies in Modern and Contemporary Japan Series, 2022) investigates Japanese contributions to transnational histories of science by examining the public politics and private lives of a disproportionately influential group of zoologists whose imperial and postwar global influence arose out of their unique cosmopolitan circumstances in research and travel within the Japanese and Anglo-American empires.  For these scientists, the study of birds was a political act, and very much an important part of prewar empire-building and postwar peace: https://www.bloomsbury.com/us/japans-empire-of-birds-9781350184930/.

Her third monograph, Democratizing Luxury:  Name Brands, Advertising, and Consumption in Modern Japan (University of Hawaii Press, forthcoming September 2023), examines how iconic Japanese companies at key historical and sociopolitical moments assigned symbolic capital, or "luxury", to mass-produced products as a business model. The book adds to the understanding of the development of capitalism and consumerism within a Japanese context, and reveals the unique and universal processes involved in market expansion.

Recent publications of book chapters and articles include: "Battlefield Comforts of Home:  Gendered Commercialization of the Military Care Package in Wartime Japan, 1937-1945" (in Defamiliarizing the Asia-Pacific War, University of Hawaii Press, 2019), which reveals how Japanese women played a pivotal role in Japan's mass mobilization for war where civilians supported the military through patriotic consumption and morale-building; "Reflections on Historical Objectivity and Intellectual Engagement: Transnational Scholarship on Mutual Sino-Japanese Historical Issues during Imperial Japan's Wartime Occupation of China" (in A Study of the Transformation of International Relations Structures and the Historical Problem in the Asia-Pacific, Koyo shobô, 2019 [in Japanese]); and "For the Birds:  Oliver L. Austin's Connections with Japanese Scientists During the Allied Occupation of Japan," in Endeavour (December 2017), which examines postwar collaborations between Japanese and American scientists that transcended wartime animosities and re-established earlier networks.

Past publications include "Constructing a Rural Utopia:  Propaganda Images of Japanese Settlers in Northern Manchuria, 1936-43" (in Empire and Environment in the Making of Manchuria, University of British Columbia Press, 2017); "'For the Sake of the Nation':  Mobilizing for War in Japanese Commercial Advertisements, 1937-45," (in The Consumer on the Home Front: Second World War Civilian Consumption in Comparative Perspective, Oxford University Press, 2017); “Japanese Mothers and Rural Settlement in Wartime Manchukuo:  Gendered Reflections of Labor and Productivity in Manshû gurafu [Manchuria Graph], 1936-43" (in Motherhood and War, Palgrave MacMillan, 2014); and "Shiseidô's Empire of Beauty:  Marketing Japanese Imperial Modernity in Northeast Asia. 1931-41," in Shashi--The Journal of Japanese Business and Company History (2013).  Forthcoming book chapters and articles feature topics related to global cultural production during WWII, wartime multi-ethnic literature collections in Manchukuo, and issues of historical objectivity in scholarship related to Sino-Japanese wartime history. 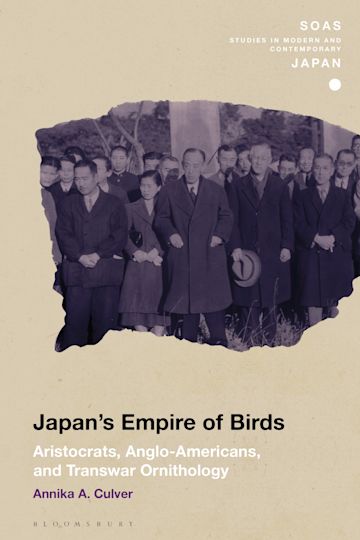 As a transnational history of science, Japan's Empire of Birds: Aristocrats, Anglo-Americans, and Transwar Ornithology focuses on the political aspects of highly mobile Japanese explorer-scientists, or cosmopolitan gentlemen of science, circulating between Japanese and British/American spaces in the transwar period from the 1920s to 1950s. 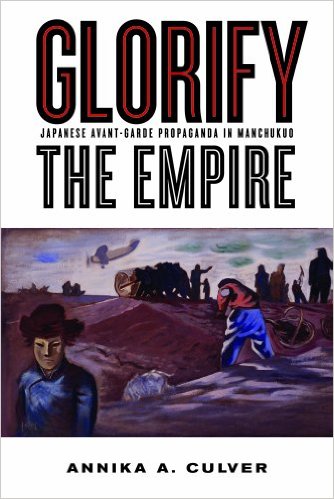 In the 1930s and ’40s, Japanese rulers in Manchukuo enlisted writers and artists to promote imperial Japan’s modernization program.