On Diversity in the Caribbean and Graduate School – Dr. Laurie Wood spoke with Alice Fabela 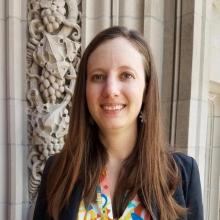 Diversity, inclusion, and the history of these topics have come to the fore over the past few months as the United States has taken a hard look at its racial history. Over the summer, Dr. Laurie Wood joined Alice Fabela in a Zoom interview to discuss how these topics pertain to Dr. Wood’s scholarly work. Dr. Wood received her PhD in History from University of Texas at Austin. She began teaching in the FSU history department in 2014 and is currently an Associate Professor.

Dr. Wood began the conversation by describing her approach to teaching and research.  She takes a global perspective on early modern world history, with a special focus on France’s colonies. She is especially interested in the French Caribbean, an extremely diverse colonial society that is often overlooked because of the larger British and Spanish colonial presence in the region. In the Caribbean, people from different geographic and cultural spaces were constantly interacting. Languages influenced each other and cultures mixed, making the Caribbean a global meeting point on many levels. The Caribbean also occupies a central place in early modern world history because it was the center of the transatlantic, slavery-based economy. Even though the Caribbean was exceptionally diverse, some of the cultures that influenced it the most – notably those of Africa – have often been overshadowed and ignored because the traditional historical narrative has focused on the European rulers and their society.  For everyone, for masters as well as the enslaved, life in the Caribbean was difficult because of the permanent climate of oppression, violence, and revolt, as well as because of disease and extreme weather phenomena.  Despite these hardships, the early modern Caribbean brought together Latin American, African, European, and indigenous histories all in just a few islands in the middle of the sea.

Dr. Wood became interested in the Caribbean during her undergraduate studies.  She took that interest to graduate school, where her studies focused on early modern Atlantic history. She decided to specialize in the Caribbean, because she was initially drawn to the fact that people traveled there to make new lives.  The Caribbean thus became a cultural melting pot for those both living on the islands and traveling to them. For her doctorate, Dr. Wood she investigated how the law affected people, especially minority populations and women, during their Caribbean experiences. Although she had not initially expected to end up in academia, she is glad she did.  But, she emphasized, pursuing a doctorate in history takes a long time and requires a vast quantity of work.  She advises those of her students who want to work in the field of history but do not want to pursue a doctorate that, with a BA or MA in history, one can work in government, fundraise for non-profit organizations, and work in public history. .

Dr. Wood also discussed the difficulty in learning and talking about subjects such as race, class, and gender. But frank and probing discussion of these subjects is essential.  It changes the questions people ask themselves and the way they look at the world. History is one of the best ways to engage with these critical issues.  It teaches how to use different research tools to find answers to one’s questions, whether it is by analyzing primary sources, interviewing subjects, or conducting studies and research. And just as important – it teaches people how to formulate the right questions to ask.  That skill is perhaps the most important ingredient in critical thinking.

Dr. Wood’s doctoral dissertation has just been published as a book: Archipelago of Justice: Law in France’s Early Modern Empire (Yale Univ. Press 2020).  To turn her dissertation into a book required a great deal of revising, and the finished product ended up being very different – really an entirely different work of scholarship.  In the process, Dr. Wood returned to the archives in France, conducting months of new research.  Then she spent even more time analyzing her findings, organizing them into a cogent argument, and presenting them in polished prose.  The first draft of any piece of writing is messy, and the process of revising can be tedious.  But Dr. Wood enjoyed the challenge.  It gave her pleasure to craft her words, paragraphs, and chapters so that her arguments came across with as much clarity and force as possible.

Dr. Wood is currently working on her second book project. Fortunately, she completed most of her research before quarantine, so she has been able to start the writing and editing process. Her new book looks at the experience of women in the colonial Caribbean.  Dr. Wood has always been interested in the lives of women and wants to understand what being a woman in that world was like. She is especially interested in the experience of widows.  How did they deal with family matters, like inheritance and the marriage of grown children?  Women were central to the functioning of colonial Caribbean society, including the institution of slavery.  The issue of slavery is massively important, because it has shaped many of the systems of the modern world. Dr. Wood believes that this history cannot be ignored.

Staying healthy, both mentally and physically, has been important for Dr. Wood during quarantine. Working on collaborative projects with colleagues has kept her busy.  Another one of her activities is gardening. Because work has entered the home for most of us during the COVID-19 pandemic, Dr. Wood believes it is all the more important to maintain a work-life balance.

Listen to Dr. Wood talking about her book on The New Books Network.