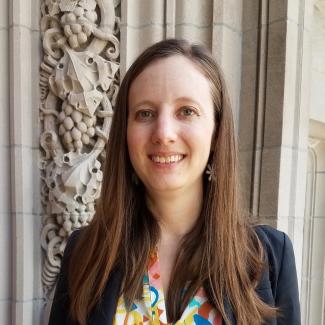 Office Location
Bellamy 411
Email
lmwood@fsu.edu
Laurie Wood is a historian of the early modern world. Her research focuses on Francophone history in comparative and global perspectives. She primarily teaches courses in Atlantic, Indian Ocean, Early Modern European, and World History that bring together the early modern era and 21st century. For the academic year 2017-18, she was a Fellow at the Shelby Cullom Davis Center for Historical Studies, Princeton University.

Teaching:
Spring 2019:
Previous Courses, 2014-18:
Research:
Her first book manuscript, Archipelago of Justice: Law in France's Early Modern Empire, is the first book-length study to evaluate the distinct but interwoven trajectories of the people, such as itinerant shipworkers and enslaved people, who built France’s first global empire between 1680 and 1780 in the Atlantic and Indian Oceans. These imperial subjects sought new political and legal influence via law courts, but with strategies that reflected local and regional priorities, particularly regarding slavery, war, and trade. Through the lens of neglected judicial records, this project shows how courts became portals between new colonial possessions and France. It thus reveals the historical transformations that catalyzed connections between the Americas, Africa, Europe, and Asia, uncovering the possibilities and limits of participation in a globally-integrated society.
I am also working on a second book project, Risks & Realities: Death and Credit in the French Tropics. Analyzing previously untapped cases of marital abandonment and accidental death, this book delves into the lives of the people, especially women, who maintained a global early modern economy one family enterprise at a time over the course of the long eighteenth century. It appraises the effects of death, natural disasters, and other catastrophes on these people and considers how credit enabled (and sometimes wrecked) their enterprises. Embracing the global scope of family enterprises, it charts a new method for reconstructing histories from the fleeting impressions that these lives have left in the archives by assessing and synthesizing hitherto under-utilized civil litigation (especially regarding inheritances and mortgages) for the French Antilles and Mascarenes in the Atlantic and Indian Oceans respectively.
Recent & Forthcoming Publications:
Recent Grants/Fellowships: